As a woman in insurance, I’ve often fought to overcome my own self-doubt as well as correct others’ perceptions of me.

In the area of the Midwest where my agency is located, I can only name five or six agencies that are owned by women. Leadership in most agencies is still very male dominated, as is sales.

One of my first phone calls as an insurance agent was with an older woman who told me, “I don’t want to talk to you. I will only discuss my finances with a man.”

Those kinds of attitudes lit a fire, and I chose to turn doubt into determination and prove that women can sell – we shouldn’t only be relegated just to behind-the-scenes service roles.

When my brother and I split our parents’ agency in 2016 and I became full owner of my own agency, it served as a sort of reboot, a chance to rethink what I wanted the agency to be. Over the years, I had observed that in most agencies, the mostly male producers got sales commissions and made a decent living, while the mostly female customer service representatives (CSRs) made far less and were undervalued considering they performed most of the work and many times knew the product better.

I saw the value in the more traditional women’s roles in the agency, but I also knew women could sell.

So I decided to create hybrid roles, where everyone in the agency can handle any client that comes in. The members of my small team are account managers who sell and work as a team. I wanted everyone working in my office to be making a substantial income and be able to support their families. I’m open with my staff about our finances and how things work with commissions and bonuses. Transparency gives my team the power to not only build this agency but establish a foundation for them to possibly one day buy the book of business or start their own agency. 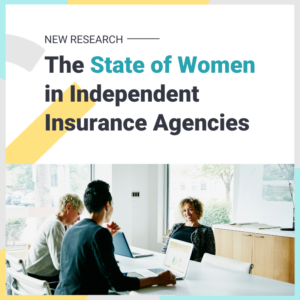 The era of producers being mostly men is changing. Clients seek out independent insurance agencies because they value a relationship. They want someone to explain their coverage and talk through the options. Taking the time to build relationships and trust with clients is the only way that independent agencies are going to survive. Women tend to inherently develop those “soft skills” that help build connections. We can use that to our advantage.

Do what works for you

It can be tough to know what to do as an agency owner when you’re comparing yourself to others and people are telling you you’re doing it wrong.

For example, I’ve been advised in the past to not get too emotionally involved in my agency or too attached to employees.

But I can’t help it. That’s who I am. That’s how I’m wired. It can be taxing, but ultimately, it’s benefitted my agency, because my team and my clients see that I’m human.

For any other women who may be struggling with imposter syndrome or wondering if they are doing the right thing, I would say listen to your instincts.

Your gut is usually right. Don’t be afraid to be yourself and do what works for you. Be a woman. There’s a lot of power in it.

Take all the knowledge that you have and build on it. If you’re an agency owner, build the type of agency you would want to work in. Have a goal of what you think your agency should look like, then work toward it and don’t give up.

As an agency owner, I initially shied away from the spotlight. When opportunities did come to speak on topics such as diversity, I wondered why I’d been asked. I definitely have a voice and opinions, but I felt like I wasn’t living up to my own ideals, so I didn’t feel worthy to talk about them.

Research shows that I’m not alone. Women are less comfortable with self-promotion than men, less likely to go after a promotion if they don’t meet all the qualifications, and more prone to imposter syndrome.

This doesn’t necessarily mean that women are less confident than men. It just means that we are not always good at giving ourselves the credit we deserve. It is ingrained in our society that women should not be boastful and proud of our accomplishments.

It has taken time for me to accept the recognition that has come my way.  I am constantly focused on the evolution of this agency. Goals are achieved and we celebrate too many successes to count.  I have allowed myself to take it all in and realize the recognition has been earned by my hard work.

Raina Walton is the president of RT Thomas Insurance in St. Louis, Missouri.

Lessons in Leadership, Mentorship and Allyship from 40 Years in the Insurance Industry

Women, to Grow Your Career in Insurance, Find a Female Mentor

Starting Conversations About Diversity in the IA Channel

Research report
The State of Women in Insurance Agencies

Read our new research report to learn about the state of women in independent insurance agencies.