When I first entered the insurance industry 38 years ago, I could never have imagined I would end up where I am today.

Following a brief stint at a small software company after high school, I was looking for something stable. When I saw the job posting for a personal assistant at an insurance company, I thought, “What could be more stable than insurance?”

My journey from personal assistant to regional executive required patience and persistence. Here are some of the things I learned about leadership, career growth and allyship along the way: 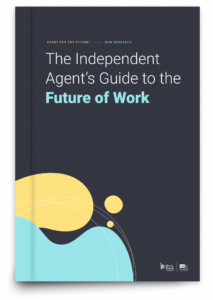 This article is part of our new Future of Work Guide. Click on the image to view the full guide.

View the job you have as the best job for you

There’s a mantra that I love that I heard from an old boss: “The best job you have is the one you have right now.”

When I came into the insurance industry, they were just beginning to use PCs. This was new stuff back then, and it was foreign to everyone. However, I had just come from a computer software company. I wasn’t afraid of computers. Because of my stint at the software company, I knew enough to step in and bring value. I took on the attitude of “I might just be a personal assistant, but I’m going to do the very best I can and show that I want to contribute.”

That mindset served me well, because leaders saw me and said, “Have you thought about being an underwriter?” That willingness to step up and do my best opened up my next moves and got me down my career path. So I think that’s key.

No matter where you are in your career journey or what role you have, you should always love what you do, view your current job as the best job for you and focus on trying to be the absolute best at it.

That will serve you well, because there’s a misconception that people aren’t watching when you’re not in a clear leadership position, but they are paying attention.

Be patient and flexible

Insurance can be a hard industry to break into, because insurance leaders appreciate tenure and experience, and there are a lot of experienced people in the industry.

This may mean that you will have to be patient and allow your career path to take some turns you may not have expected. Perhaps you’re working in a service position at an agency, but hoping to eventually get licensed and move into a producer role. Or maybe you’re at a large agency where there are many people in line for promotions.

Be flexible. Be willing to take that sidestep before you take that step forward. Rethink your development and how you go about advancing your career. Stay inquisitive and learn to be both competitive and collaborative.

Look for mentors who will give you honest feedback

Early on in my career, I had a lot of mentors thrown at me. I learned that a mentor-mentee relationship can’t be forced. Just because someone is suggesting someone to mentor you doesn’t mean that it will be a good fit.

Try to build a relationship first. Is there a connection? Are they willing to ask the tough questions? Find someone who’s honest, even if it’s brutally honest. Because it’s important to get that candid feedback.

When I’ve been on the mentor side of the relationships, I’ve had times where people want me to tell them what they need to do to get to the next phase of their career. I immediately say, “Let’s talk about the things that your manager tells you that you should work on.” Often, they don’t want to talk about that, but that’s the stuff that’s going to be a big decision factor in your next promotion.

You have to work on finding sponsors – it’s not going to come naturally. Do they know you well enough? Are they willing to make that call? Can they provide good talking points about who you are and the work you do? It takes significant investment to build those relationships.

Be an ally and ask for allies

Over the course of my career, I often found myself in situations where I was the only woman or person of color in the room. I’m tough, so my approach to this was usually just to deal with it and move on.

However, one situation that still deeply impacts how I approach professional relationships was a time that I was bullied by a male colleague. It was aggressive and toxic, and it went on for quite a while. I told that story at a “Men as Allies” event, and when I’d finished, one of the men who was on the speaker’s panel with me looked out at the men in the room. He said, “In that scenario, think about how much easier it would have been for one of you to interject and tell that man to knock it off.” He said it very simply, but it was a lightbulb moment for me. We tend to think that we just have to force ourselves through tough situations – we don’t realize we have peers and allies who are probably willing to help us if we ask.

One of the steps Liberty teaches through our Inclusion in Action program is the “step back” approach. The idea is to step back and then help a person step up. It’s not about rescuing someone or speaking for them – it’s about helping them find their voice.

I’m passionate about this because there were many years in my career where I didn’t have a voice. And it really was some of the allies – some of the men that I worked with – that stopped and said, “You know what? We should listen to her.” They made way for me to have a voice.

Don’t be afraid to reach out and ask for help when you need it. And be sure to build relationships with your colleagues so they come to you when they need help.

After all, the relationships you build will be the most important parts of your career. People are the most valuable asset of any business.

We’re seeing some big changes in the insurance industry. COVID-19 has forced insurance agencies and companies to adopt more technology, rethink how to structure workplaces and reevaluate how to care well for employees.

But no matter what changes in the industry, insurance will always need talented, hard-working people. No matter what role you’re in today, if you’re willing to work hard, stay flexible, seek out honest feedback and build strong relationships with your colleagues, you’ll be well positioned to build a fulfilling career.

Myrna Estrada is a Senior Vice President and Field Executive for Liberty Mutual Insurance. She has the privilege of leading 67 sales professionals in a 6-state footprint in Liberty Mutual and Safeco’s Central Region. Myrna and her team distribute Safeco Personal Lines products, and Liberty Mutual Business Lines products through Independent Agents. Myrna is also very involved in Diversity and Inclusion work within Liberty Mutual. She is the Executive Co-Sponsor of the Amigos employee resource group and is on the Council for Men as Allies.

4 Leadership Lessons After a Year Unlike Any Other

The Future of Work Has Arrived: How Independent Agents Can (and Should) Adapt

The Independent Agency for the Future is Inclusive for All

Article series
How to navigate the future of work

Read more articles in this series for agent advice and practical tips for adapting to changes in the workplace.