By 2060, racial minorities will make up more than half of the total population in the U.S. This shift has already happened in younger populations – Brookings found that 44 percent of millennials are nonwhite.

When I heard some of the statistics about race and diversity at the Big I diversity conference earlier this year, it made me think about how this relates to the independent agency channel.

The independent agent channel currently does not reflect the diversity of the population. That needs to change if agencies want to continue to thrive.

What does the future look like? It looks diverse!

If we in the IA channel are not targeting diverse markets, we’re missing out on a big piece of the pie. And we can only reach those markets if we reflect diversity within our agencies, as well.

How do we make that shift? There are no easy answers. Agency owners are busy, and recruiting talent is already hard.

But I’d challenge every agency to take a look at their agency and start opening up conversations about diversity and inclusion.

As a biracial woman, I’ve openly had conversations about race and diversity my entire life. I am very comfortable in this space and have always considered myself a bridge maker. I have never shied away from bringing up the topic, but I know these conversations can be uncomfortable.

A few years ago, I had the privilege of attending a Safeco conference for women leaders in insurance. It was a wonderful conference, and I left inspired and proud to see how far women have come in the insurance industry.

However, I was aware that I was the only invitee that was person of color in the room. I wasn’t particularly upset about this – it’s always been that way in my 20+ years in the insurance industry. But I did mention it to Gary Mesler, my territory manager for Safeco, when he visited my office and asked about the conference.

I thought the conversation would end there as it normally does, but it didn’t. That night, Gary went over his agency list with open eyes, and for the first time, he saw the lack of diversity in not only agency owners, but also in producers, CSRs and support staff. When he brought this up to other team members in his region, their response was the same. They realized this had been a blind spot. Gary brought the conversation to his Field Exec, Myrna Estrada, who challenged him to champion the issue of diversity within the independent agent channel.

When Gary and I met again a few weeks later, I was shocked to find out all that had happened! He had already formed a group of agencies wanting to have the conversation about how to bring more diversity into the IA channel.

Our group now meets regularly, and we’re working on ideas for programs to help agencies with hiring and diversity training. 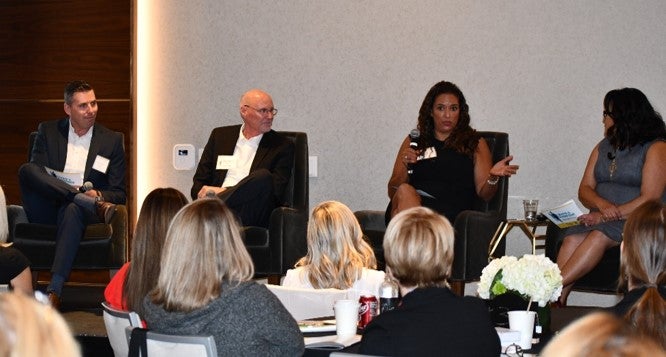 Hiring outside your sphere

Hiring is tough. Small business owners often tend to hire family members or friends, or people in their circles who have fallen into the industry. That makes sense, but it lends its hand to repeatedly hiring the same people – people who look and act and think like the agency owners.

To increase diversity in hiring, agencies will have to be purposeful and look outside their usual sphere.

The tactics for this will look different depending on the area the agency is in.

Agency owners – especially small agency owners – also need help from carrier partners and larger organizations. Because it’s not enough to just get diverse talent in the door – we need to make sure agencies are welcoming and supportive of all employees. Diversity & Inclusion training within agencies can help with that.

I’ve been amazed to see how one comment can turn into so much, and I’m glad to see more conversations about diversity happening in the insurance industry. There are still many questions and issues to address, but we can start by making this less of a taboo topic.

If we want to see independent insurance agencies continue to be successful into the future, we’re going to have to start having these conversations and make sure we build inclusive agencies.

Raina Walton is the president of RT Thomas Insurance in St. Louis, Missouri.

This is MY boss! I get to see her live this out daily. She is the hardest, strongest women I know and getting to have her as a mentor is amazing. Go boss!!!

So proud of you Raina. We are privileged to be a part of your amazing story. Thank you “poking the bear” in all of us when it comes to Diversity and Inclusion. It’s about all of us. Not one person can make it happen, it will take all of us.

So glad Raina we held the MO Women conference and we lit the spark! So proud of the strides you and Gary and Safeco are making!

Congratulations Raina! This is hard work and I am so inspired by your willingness to walk this out. Also, I love that you have found a supportive ally to help you.

Hello my dear Friend so proud of you

What a great article! Congratulations to you, Raina; and to Gary, for listening, hearing and helping to advance the ball.

Great article! I am proud to work for a company that is a Champion for diversity!

This is very important to me, as I want to be part of the solution to helping the insurance industry become more representative for people of color.

As a white agency owner and currently a one-man shop, do you have any suggestions? I obviously need to hire the most qualified candidates, but would love to hire in a diverse manner when I’m ready to expand my business in the coming years and find a talent pool that includes diverse candidates.

If I was much younger, I would move to Missouri to work with you or you could move to Florida to work here on the Gulf Coast with beautiful beaches and Palm Trees. One recommendation for Carl Adams: hit the college campuses and recruit college students. Not too many are studying insurance in College, but they are studying business and marketing.

My Big Turning Point: How Doing Things That Scare Me Grew My Career

3 Ways to Increase Employee Engagement in Your Agency

Clients Want to Know: How Are You Giving Back?