A few years ago, I heard a workplace statistic that shocked me: only 31 percent of the American workforce felt engaged at work.

Fast forward to a 2018 Gallup poll, and the headline is billed as good news – it’s now up to 34 percent and is the highest percentage of employee engagement since Gallup began polling in 2000.

To me, 34 percent seems way too low. It means 66 percent of Americans are disengaged at work. For two-thirds of American employees, Monday is the worst day of the week, five o’clock can’t come soon enough and everyone is working for the weekends. They’re putting in their time. They’re doing their job (though probably only the minimum amount required), but they’re not excited about what they do. They’re not happy at work.

The average person will spend 90,000 hours of their life at work. If that much time is spent working, everyone should love their job! I love what I do, and I want everyone who works with me to feel the same way.

As the owner of an independent insurance agency, this statistic also challenged me. What can I do to help increase employee engagement? What decisions can I make to help my co-workers build a career that is satisfying and fulfilling?

I’ve always sought to make Harbor/Brenn Insurance Agencies a great place to work, but in the last few years, I’ve been working even harder to be the employer of choice in the insurance industry in my area of northern Michigan.

1. Dig into the deeper meaning behind your work

Not long after I officially stepped into the role of president at Harbor/Brenn five years ago, I began a yearlong education process with the executive director of our chamber of commerce to learn about conscious capitalism. Conscious capitalism is an economic system that centers around conducting business in ways that are socially responsible and ethical. During that year, we talked about developing intentional plans for purpose, culture, stakeholders and leadership within our companies. Those things also improve employee engagement.

Along with the inherently meaningful work of advocating for customers, I want people who work here to be active members of the community, giving back in whatever way suits them. So I encourage a lot of volunteer time, both as a staff and individually. I don’t limit volunteer hours during the workday, and we have a chip system to pay people back if they volunteer after hours. Volunteering after hours earns them extra vacation time, or dinners out with their spouse.

This ultimately benefits the agency because we’re everywhere, so everybody in the community knows us. It brings in referrals and new business. We’re helping make a difference in our area, and people are recognizing that.

2. Give employees a voice

My dad started Harbor/Brenn in the late ’70s, so I have been around the agency ever since I can remember, and I’ve known many of the staff members since I was young. Through the years, I’ve literally worked every position in the agency – file clerk, receptionist, assistant in personal and commercial lines, CSR.

This built-in trust makes it easier to have honest conversations with my staff. They feel comfortable sharing their concerns with me. I try to be as transparent as possible about what I’m thinking and the changes I want to make. I like gathering the collective group to be part of the brainstorming and feedback process because they’re going to have ideas I haven’t thought about.

I’ve found that employees are more engaged in an idea or new program if they were part of the process of developing it. One of the main ways to get buy-in is to make sure everyone feels like they have a voice. 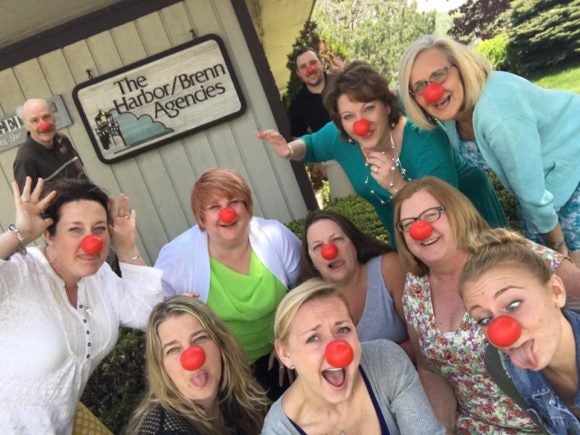 The concept of work-life balance doesn’t work the same way it used to. It’s not realistic to think that your personal life fails to exist from 9 to 5, and then your work life fails to exist after 5pm. You’re going to run into a client at the grocery store, or go to a baseball game and sit next to someone who needs insurance for their 16-year-old new driver. Similarly, your kids are going to have school events you need to attend during the work day.

At Harbor/Brenn, we’ve invested in the technology and processes we need so our staff can work when and where they need to, and not be stuck at their desk from 9 to 5 every day. My concern is not that somebody is sitting at their desk for eight hours a day; my concern is that clients get taken care of. Phone calls have to be answered or returned, customers have to be taken care of, but if an employee has to log in for an hour or two at night to catch up on emails because they were out for an hour or two during the day to do something else, that’s OK.

Employees have enjoyed the option for flexibility, and it’s helped with productivity, too. In February, we had nine school snow days. Nine days when the roads were horrible. Since we have the technology in place, people were able to work from home and not have to worry about driving in to work in bad weather. The bonus: we actually got more done on those snow days than we did other times we were open full-time, because there were not as many interruptions for people at home.

Engagement starts at the top

Creating a team of engaged employees who love what they do is a constant work in progress. Employee engagement starts with creating a workplace culture where employees feel like their work is meaningful, they are cared for and appreciated and they have room for growth.

When employees feel cared for at work and love what they do, they are better able to care for clients. For example, we had a client who ended up buying his vehicle back with a salvaged title after a total loss. The insurance company said that it would be covered at 100 percent in the event of a future accident, in spite of the salvaged title. But when that accident happened two years later, the company was going to give him $5,000 less than promised.

My agent pushed back, even though the insured was satisfied. She called the company and had them find the recorded call from two years earlier when they had said it would be covered at 100 percent. She took the claim through three levels of management and ended up getting the client another $2,500. She did this on her own initiative, because it was the right thing to do for the insured and because she cared about making it right. That’s the power of an engaged employee.

As several of my teammates prepare to retire in the next few years, I want to continue to make sure that Harbor/Brenn is a place full of people who love what they do and are willing to go above and beyond for clients.

Ashley Whitney grew up in the industry as part of a second-generation independent insurance agency in Northern Michigan. She has been a passionate advocate for conscious business practices, community involvement, and efficiency in operations as she’s transitioned to agency owner. She’s developing the best path forward for her agency, her co-workers & her community at large. A thriving community starts with thriving businesses, and she’s determined to help them succeed.

Thank you for sharing!

This story is really “Right on” the money.
I Love my customers and Love my job and because of this, my 9-5 isn’t work, it is my future full
of growth, new experiences and my way of connecting with my community.

7 Practical Ways to Make Your Agency More Innovative in 2019

Clients Want to Know: How Are You Giving Back?

How My Passion for Helping Others Contributes to My Success